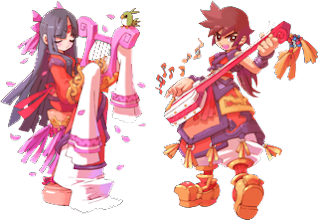 If you like support classes that involve mainly buffing your party (or pets) to superhuman levels of awesomeness, then Musician is likely the class for you! To start off, you’ll need to do the Musician Job Qualification which starts in Placid Plain (bring a Down and a Vine Rope as well as 100g before you go there to save you some time). Once that is finished and you’ve unlocked the Musician job, you can go to the Career’s Advisor in the dojo and change your job to Musician whenever you want!

Introduction – What is a Musician?

The Musician (a.k.a. muse) is the buffing/support class in DOMO. Musicians wear Dancer’s Costume (a.k.a. Dancerwear) which gives them slightly higher evasion and magic evasion than their robe-wearing counterpart the Doctor. Their weapon of choice is the Musical Instrument, which varies in appearance from wooden banjos and lutes to elegant harps and zithers.

Musicians are both like and unlike traditional bards in other games. Their damage by themselves is rather low, and without a pet they are quite useless while soloing (and beyond useless in PvP). The party muse would focus on buffing party members, while the pet muse would focus on buffing pets. They are also the only class in the game that can heal another player’s MP.

There are quite a few pet muses out there, but a majority of the Musicians you will find are going to be party muses. Hybrid builds have been attempted and failed many times. You need to pick which one you want to do and stick with it.

Party Musicians will focus on the Musical Magic skill tree only (level 1 pet HP and MP heals are acceptable to save money, but should not be leveled higher until all your songs are maxed out). Your main job as a party muse is to make sure everyone has MP. Without the muse, the Doctor wont have MP to heal anyone, the tank wont have MP to use their taunt skills, and the AoEs wont have MP to deal damage and get your exp for you. Without the muse, the party would inevitably die. You also have other important buffs such as attack, accuracy, and evasion that should be up whenever possible. It is important to note that while casting party songs, you are immobile and vulnerable to attack – so always make sure you’re near the tank when performing to avoid unnecessary death.

Pet Musicians will focus mostly on the Pet Songs skill tree, though they may also grab the attack skills from the Musical Magic tree as well if they wish. You will have pet HP and MP heal skills as well as buffs that greatly resemble the party buffs that are just for your pet. Make your pet have more max HP and higher attack and defense, then send them off to fight monsters while you sit back and heal them (or use your attack skills to help out – your choice). While technically any pet would work for a pet muse, the Ruby is highly recommended because of its high damage (it’s basically a mage – high magic attack but low HP/defense). If you don’t have a Ruby or can’t afford one, any pet would do fine, but you wont kill things as fast.

Mystic Mantra – (a.k.a. mantra) regens MP for the whole party (except you). This is the most important song – always have this up! Level it up first before any other song when available.

Courageous Chorus – buffs attack and magic attack of the party.

Song of Concentration – buffs accuracy and magic accuracy of the party.

Diligent Ditty – buffs evasion and magic evasion of the party.

Transfusion Tune – (a.k.a. fuse) takes some of your HP and turns it into MP and gives it to the target (you can target yourself). Great for subbing on other classes with Instrument equip. You should make sure you have the Doctor buff Prolong Life on you before casting as this increases your max HP so you have more HP to fuse with.

Mars’ Song – a long song that buffs attack, accuracy, and evasion of the party. For use alongside short songs. Takes a long time to cast.

Hymn to the Goddess – a long song that buffs magic attack, magic accuracy, and magic evasion of the party. For use alongside short songs. Takes a long time to cast.

Echo Guard – a long song that reflects damage and skills back at the attacker. Takes a long time to cast.

Supersonic Swipe – really powerful AoE skill that does a lot of damage (and tends to draw a lot of hate because of it). Not required, but if you aren’t getting equip it is nice for some added damage (plus it’s fun to scare the doc when you use it after a fuse).

Soothing Serenade – pet HP heal. Not required or recommended past level 1. Once all songs are maxed out, then leveling past level 1 is acceptable.

Song of Serenity – pet MP heal. Not required or recommended past level 1. Once all songs are maxed out, then leveling past level 1 is acceptable.

You will need literally all of the skills in the Pet Songs tree. You will find your pet HP and MP heals as well as buffs for attack, defense, accuracy, evasion, and even crit rate. Keep all of your pet’s buffs on at all times for best results. Your pet will tell you when the buffs have 30 seconds left so you will know when they are about to run out and when to cast them again. Sonic Swipe is optional, but useful if you want some added damage from yourself instead of just sending your pet out to do your bidding while you sit on the sidelines and heal.

Where to Allocate Your Stat Points

The Do’s and Don’ts of Party Musing 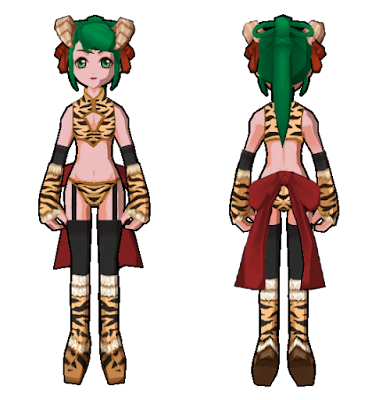